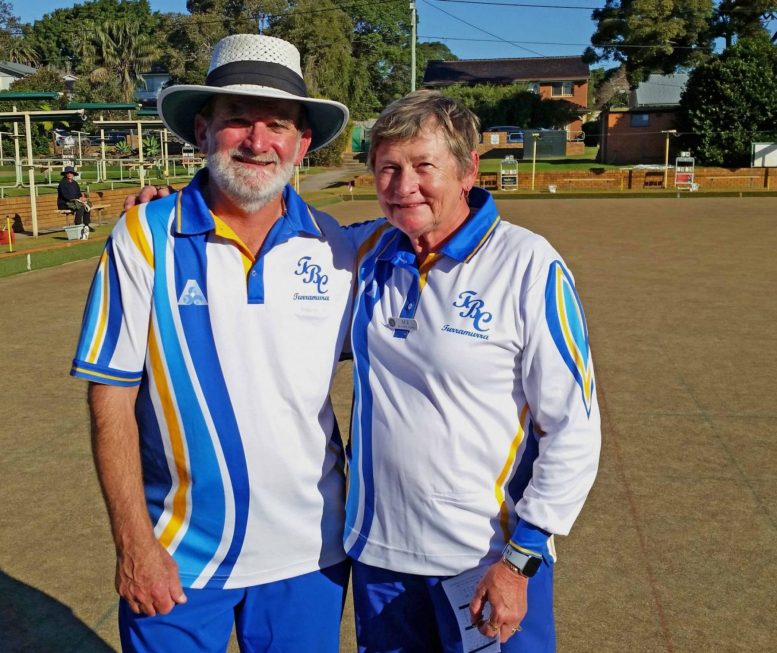 21 July 2019
Congratulations to Turramurra’s Warwick Bridge and Sue Hamilton who today became the Region 15 Mixed Pairs champions. In the morning semi-finals, Sue’s team were up against club-mate David Blackwell and his wife Elizabeth, who plays for Neutral Bay. A four on the 3rd end of the first 5-end set gave Sue’s team a handy lead, which they were able to maintain. However, the Blackwells struck back with an emphatic victory in the second set, taking just 4 ends to win the set 9-1 and head into a 1-end tie-breaker. Sue was able to get the shot with her second bowl, and ultimately win the match.
In the other semi-final, Anne and Steve Coleman (North Sydney) took on Karen and Quentin Price (Asquith). A four on the first end set the Colemans up well, but the Price pairing got the four back again on the 3rd to keep the set alive. However, Anne and Steve won the last two ends to win the set. In the second set, the Prices were restricted to singles while the Colemans were again able to pick up a four, followed by a single and a two, to give them a straight sets win.
In the North Shore District final, Warwick and Sue were playing steady bowls to pick up two on each of the first 4 ends, giving them an unassailable lead in the first set. They went on to win the first end of the second set, but Anne and Steve started finding the range and making conversions, to win ends 2-5 and set up a one end tie-breaker. Once again, Sue made her second bowl count, and Steve wasn’t able to dislodge the shot bowl or jack, resulting in a victory for Warwick and Sue.
In the concurrent Manly-Warringah Final, Mary and Geoff Rogers from Harbord were up against their clubmate Masako Sato and husband Hank, who plays for St Johns Park. Mary and Geoff had the better feel for the slick and tricky green, and pulled off a straight-sets win.
After a break for lunch, the two District champion teams went head-to-head for the Region 15 title and a berth in the State play-offs. In the first end, Warwick continued his steady form from the morning and Sue was able to add another, giving the Turramurra pair 3 shots. Another 3 on the second end gave Turramurra a 6-0 lead over the home team, but on the 3rd end Warwick misrolled the jack, giving Mary the opportunity to roll a close-to-minimum length. However, the shorter end suited Warwick just as nicely and he drew two close bowls. Mary fought back and wrested one of Warwick’s bowls out, and Geoff later had success getting another of the Turramurra shots out, but it was still one to Turramurra, making them 7-0. In the fourth end, Geoff played the winning draw shot to get Harbord on the scoreboard, but needing a full count on the last end to tie the set. Instead, it was another 3 to Warwick and Sue to give them a decisive set win.
The second set played out differently however, with a single to each team followed by a two to each. At 3-all playing the last end, the good crowd of spectators were watching closely to see if Turramurra could win the last end to claim victory, or whether this match would also be decided in a tie-breaker. The Harbord pair were holding shot and Sue’s first bowl went long; however, she pulled out that “good second bowl” again, and drew shot about 15 inches off the jack. Geoff’s best efforts to draw the jack away missed their target, and Turramurra claimed a straight-sets victory 10-1, 4-3.
With Warwick and Sue’s win, North Shore will be represented at the State Play-Offs in 5 of the 7 championship events. (For the record: 5 of 7 in 2019; 4/7 in 2018; 4/7 in 2017; 5/7 in 2016; looking good, North Shore!) 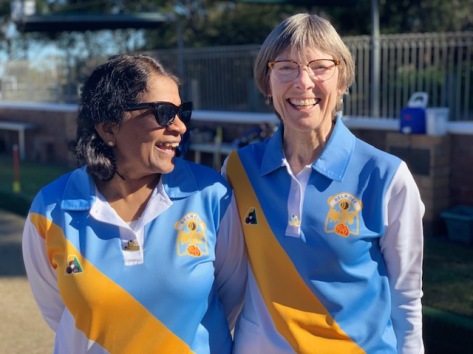 17th July 2019
The first day of the Regional Play-offs at Forestville was a stunner with Jeyam Siva and Billie Maas from Belrose coming from behind to win the Open Pairs. Mona Vale lead Delia Geddes, with her bright yellow bowls, played some amazing shots and put our girls under pressure from the start. Billie saved multiple shots on the 8th end with a beautiful draw, but Mona Vale bounced back with 4 on next end, making the score 6-13 at the half-way mark. Belrose picked up 1 shot on the 11th end, but despite Jeyam starting with 2 great bowls on the 12th end Delia drew once again to get shot. Mona Vale’s skip, Sue McFadden, followed up with a great bowl to take the 14th end and give them a handy lead at 7-17. However it was on the 16th end that the game turned when Billie played the bowl of the match to take out shot bowl and pick up 5 shots to make the score 14-17! Belrose then scored another shot on the next end to narrow the margin to 2. The crowd was on the edge of their seats! Jeyam and Billie held their nerve and drew in four beautiful bowls on the last end and Mona Vale just couldn’t match them. The final score was 19-17 to Belrose. Congratulations, Jeyam and Billie. 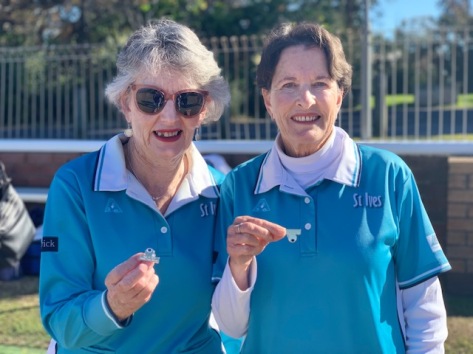 In the Senior Pairs, Sue Byrne and Vicki Bartrop got away to great start against the team from Seaforth, June McKeown and Peta Cass. Sue and Vicki both played consistent bowls and lead 11-6 after 11 ends. St Ives’ control of the game tightened after they picked up 4 shots after the Seaforth skip missed the jack by a whisker with her last shot on the 12th end. Sue put down some great lead bowls on 15th end, the Seaforth skip then drew shot, only to pick up the jack and take it back to the St Ives bowls with her next bowl – it just wasn’t their day! The final score was 22-7 to St Ives. Great bowling Sue and Vicki! 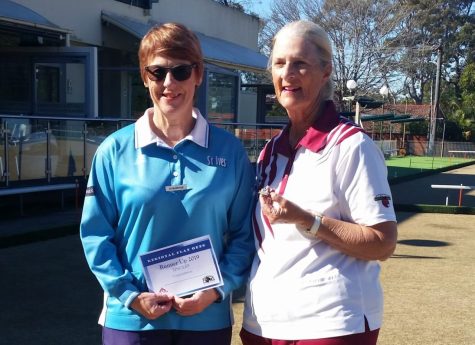 18th July 2019
Beautiful weather saw Chris Gordon from Harbord and Di McBride from St. Ives go head-to-head in the Singles Regional play-off. Chris gave all in attendance a masterclass in bowls as she shot away to an 17-4 lead. Undeterred, Di kept on drawing and eventually her patience paid off and she won four ends in a row which brought the score to 17-12. However Chris regrouped and played two magnificent ends to close the game out 25-12. Well done to both players – Chris was just too good on the day! 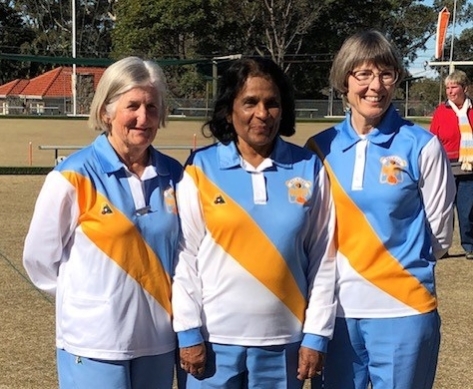 The Triples play-off was between the team of Lorraine Hazzard, Jeyam Siva and Billie Maas of Belrose and Jan Chad, Sue Marshall and Robin Morron from Dee Why. The game was fairly evenly poised until the Belrose ladies picked up a 4 on the 10th end to go to a 16-8 lead. They then took control of the game with consistent bowling, gaining one shot at a time, and went into the 20th end 23-11. Dee Why won this end 1 shot up, but it wasn’t enough to force play to the 21st end. Belrose played the better bowls throughout the match and deserved their 23-12 win. Billie and Jeyam have now won through to the State in two events. 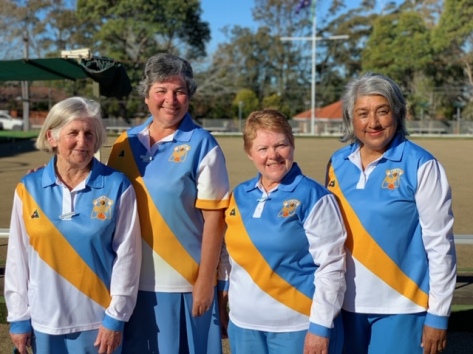 Harbord and Belrose fought out both the Open and Senior Fours today.
The Open Fours was a cracker of a game with the scores locked at 6 all after 9 ends, and 9-8 in Belrose’s favour after 14 ends. It remained a very low-scoring game but Belrose kept inching ahead, with the score 16-9 in favour of Belrose after 19ends. The 20th end was killed twice — first by Benita when Harbord were holding; then by Virginia when Belrose were getting the better of the replay. On the third attempt at closing out the end, Harbord scored, but a single, bringing the score to 16-10 going into the last end. Needing 6 to keep the game alive, and with nowhere to trail the jack to bring about that result, Harbord were keenly aware that only a “kill” would do! Third Susan and Skip Virginia both gave it their best, but Belrose clung onto a single shot to ultimately win 17-10. The Belrose team of Lorraine Hazzard, Kay King, Michelle Treadwell and Benita Andrews played the more consistent bowls throughout the match, and certainly deserved their magnificent win over Virginia Longfellow’s Harbord team.
This win made it a “triple” for Belrose with three of their teams off to the State play-offs (the same as they achieved in 2018). Congratulations Belrose! 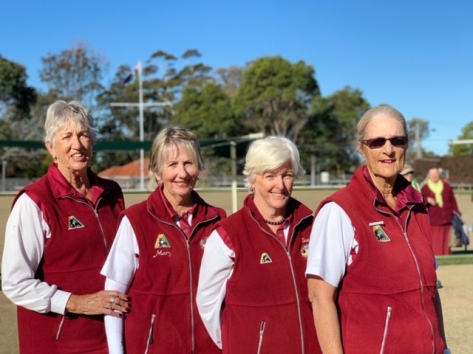 The Senior Fours was also a close game up until the 8th end when the score was 6-4 in Harbord’s favour, however the very strong Harbord team of Lorraine Belling, Mary Rogers, Susan McGinness and Chris Gordon then took control of the match, ultimately scoring a comprehensive win over the Belrose team of Judith Clubb, Margaret Murphy, Jeyam Siva and Billie Maas. Congratulations Harbord and well done Belrose for reaching the play-offs!