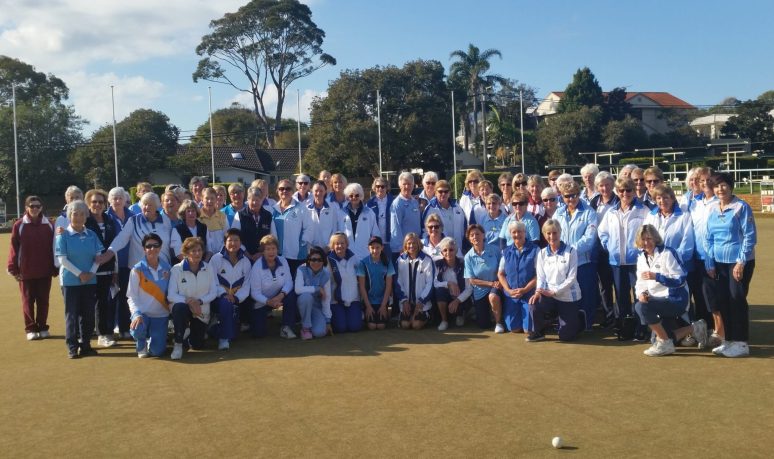 It was a cool but sunny morning at Harbord for the annual clash between the two Districts of Region 15, the Jean McKinnon Shield. After the traditional group photographs, 32 players from each of North Shore and Manly Warringah Districts took to the greens and the contest began. The extremely heavy dew had made the greens damp, and many players on both sides struggled to find the range. However, as they settled into the games, some of the North Shore teams began to build strong leads against their opponents. By the time 6 ends had been played on their rinks, District President Julie Hayden’s team was out to a 10-2 lead, and on Jan Mountain’s rink the lead was 12-5. Over on the other green, Bridget Nelson’s team had consolidated a lead of 19-2 after 10 ends, and there were only two North Shore teams behind on the scoreboard. At the conclusion of the first 15-end game, North Shore went in for lunch up 142-89. From that position, it seemed an uphill climb for Manly-Warringah; however, everyone wondered whether the momentum would shift once the delicious meal put on by Harbord WBC had been consumed. Who would the roast chicken, salads and filled sponge favour? Some of the M-W teams got off to a strong start, with Robyn Morron’s team up 6-0 and Vicki Sawtell’s team up 4-1 after a couple of ends. However, it became obvious that North Shore were determined to hang onto their lead, and whenever the Manly-Warringah players seemed to be getting an edge, North Shore wrested out bowls, trailled the jack, and kept the potential damage to a minimum. By the end of the afternoon, North Shore had lost only 1 rink, drawn 1, and won the other 6, to claim a decisive win 257-182. The day was played in great spirit, and many players had gained their first District representative selection; notable amongst them was 11-year old Taylor de Greenlaw, fresh from her success as runner-up at under-18 girls Singles at the State association-supported Drakes’ Pride Junior Carnival. We were thrilled that Taylor’s school gave her leave of absence for the day to represent North Shore in a team skipped by her mother, Jess. Well done to all players, and we look forward to next year’s rematch. Full results from all rinks below: