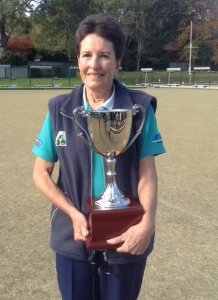 The inaugural North Shore District Singles Championship commenced on 1 June 2015 with 40 competitors. The final was played in 5 June in fine but cold conditions. It was an excellent match between Vicki Bartrop (St Ives) and Robyn Beaumont (North Sydney), with Vicki emerging the winner 25-18.

After the match, Vicki was presented with a magnificent trophy. This large silver cup was donated to our new, merged District by the clubs of the former Lower North Shore District (Mosman, Neutral Bay, North Sydney, Northbridge and Warringah.) Representatives of four of these clubs watched the final, and took pleasure in presenting the trophy.

Vicki progressed to the Region 15 Play-Off but was defeated by Benita Andrews (Dee Why).