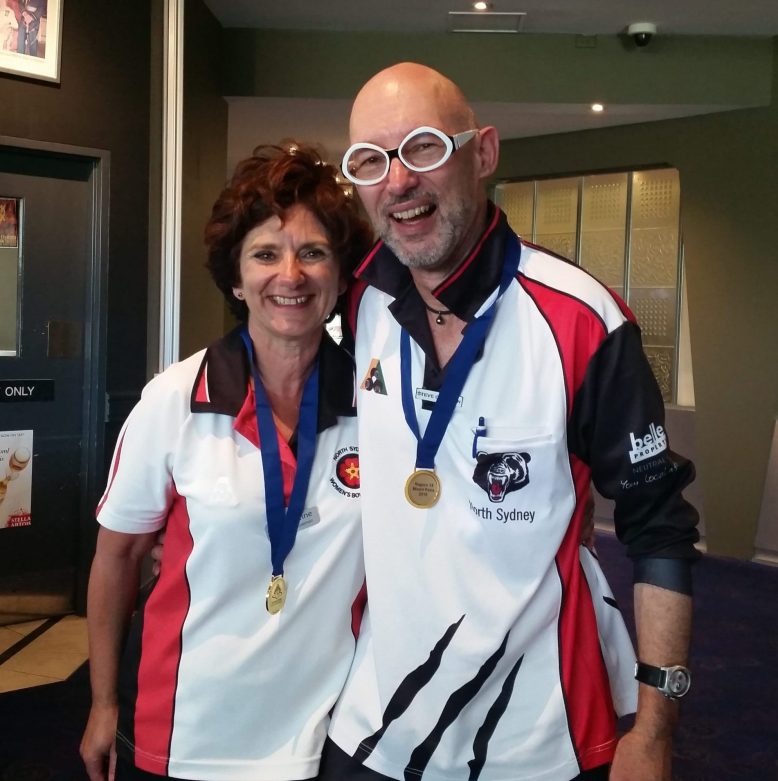 The Semi-final and Final rounds of the WBNSW Mixed Pairs Championships for North Shore District were held at Belrose BC on Sunday 18 March, followed by the Region 15 Play-Off. Despite the hot and blustery conditions, the competitors put on a display of top-quality bowling, reflecting the high-class field who entered this year’s event — especially notable for the number of Grade 1&2 men’s pennant players who participated. After the previous Sunday’s sectional round-robin, the field had been whittled down to four teams for the semi-finals. Continuing the short-game sets-play format, Anne and Steve won their semi in straight sets over Kay King (Belrose) & Wayne (“Moose”) Morris of Forestville RSL. The other semi-final, featuring Eve & Matthew Blackburn (Belrose), and Denise Owen (Mosman) with Sam Owen (North Sydney), went down to the wire, with Denise and Sam winning in a one-end tie-breaker. The final also saw the opponents win one set apiece, sending that game into a tie-breaker as well. With Denise putting in a seemingly match-winning bowl early and Sam adding to the count, Steve made two attempts to move the jack but missed narrowly. However, his final attempt found its target, trailling the jack to claim two shots and the District championship.
Then, Anne and Steve took on the Manly-Warringah District Mixed Pairs Champions Jane Gibson (North Manly) and John Churchyard (Harbord). By that time, the temperature had hit the mid-30s, although it was moderated by the dry, blustery nor-wester. Many promising-looking bowls were pushed well off course by the wind, causing considerable frustration to the players. After the Manly-Warringah pair had taken the first set, the Colemans struck back in the second, forcing yet another tie-breaker; and once again, with the opponents holding shot for the match, Steve made a conversion to claim victory. Anne and Steve were presented with their District trophies and also the Regional medallions by our District President Julie Hayden, who commented that it was great to see so many “weekend-only” players in the championship, and especially good to have had two full-time working women in the Regional final. The Colemans have secured a spot in the State Championships, to be played at Taren Point in September.