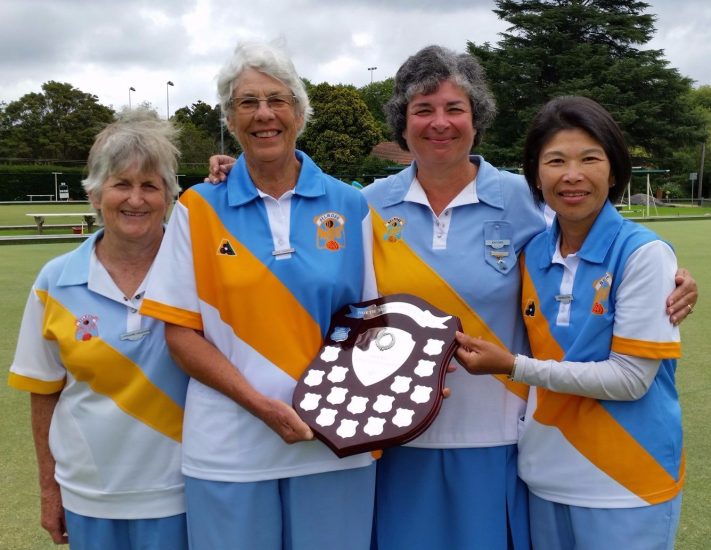 In a nail-biting final at St Ives on 14 February, the Belrose team of Lorraine Hazzard, Judith Carpenter, Kay King and Patricia Tan overcame being down 3-13 after 12 ends, to win the 2017 Open Fours Championship 26-20 over the Neutral Bay team of Lesley Szumylo, Midori Matsuoka, Maggie Jay and Lou Hamshere. The turning point came on the 13th end, when a springing of the jack delivered the Belrose team a 4, and by the 16th end there was only one shot the difference. Then a 5 to Belrose saw them hit the lead 18-14, and they drew away further until Neutral Bay picked up 6 on the 19th end to regain a 1-shot lead. A successful last-bowl conversion by the Belrose skip in the 2oth gave them 2 to go into the last end 1 ahead, then each member of the Belrose team played steadily on the last end, claiming 5 shots for a decisive win.

The North Sydney team of Slavica Beram, Peggy Wilton, Anna Vuckovic and Jenny Lea-Tutton are the 2017 Senior Fours Champions, having scored a decisive win over the Belrose team skipped by Margaret Brady in the final at Turramurra on 16 February. The North Sydney girls had looked steady all week, including Tuesday when they were missing Jenny, so Anna skipped and Barbara Turnbull came in as a sub. In the final, scoring was evenly matched early in the game, but by the 11th end Norths had drawn ahead 13-7. Belrose looked set to catch up on the 13th until Jenny knocked in one of her team’s short bowls and cut the score back to 1, for Belrose to narrow the gap to 13-9. However, North Sydney grasped the title firmly into their hands with a full count of 8 on the 15th and, despite some lovely shot-making by Belrose on the remaining ends, took out the match 24-13. (Full results from all rounds available under “Draws/Results”.)