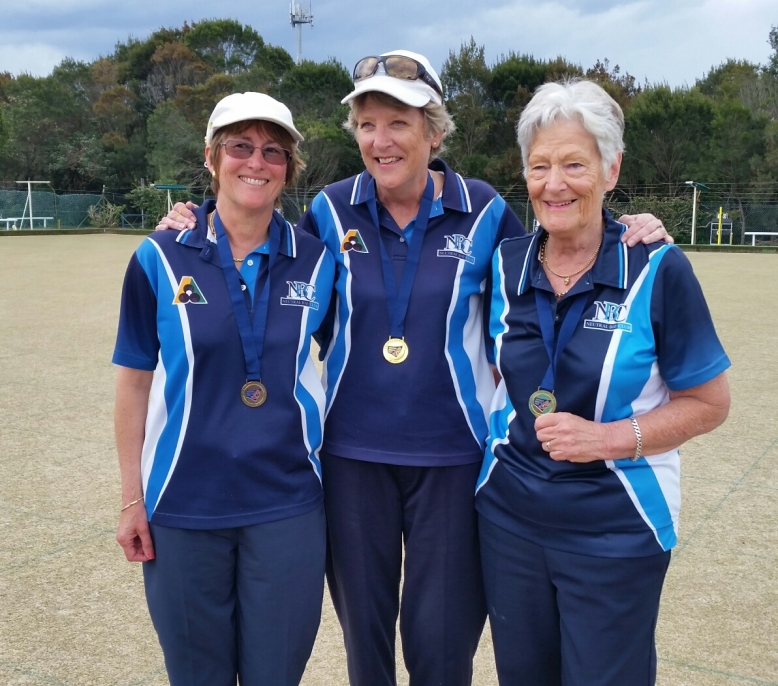 In another high-quality match, the Neutral Bay team of Elizabeth Blackwell, Jenny Hepburn and Jenny Palmer put together a good team effort to win the Region 15 Triples Play-off on Wednesday 31 August, defeating Masako Sato, Genevieve Delves and Virginia Longfellow of Harbord 20-12. From the outset, the spectators knew they were in for a treat, with Masako rolling the jack, putting her opening bowl within a couple of inches and locking the jack right onto that bowl with her second. By the time the skips bowled, Harbord held two but a small trail of the jack from Jenny Palmer cut it to 1, only to have Virginia trail the jack another 6″ to regain 2. With her last bowl, Jenny cracked an egg onto the shot bowl, springing the jack 4″ to once again cut it to 1 … this opening end set the tone for the whole match!! After 7 ends Neutral Bay trailed 2-6, then picked up a 3, followed by 2, to finally hit the lead. Two beautiful draws from Virginia on the 11th leveled the score 8-all, but the Neutral Bay players all put in a big effort on the 12th, to be holding 6 shots. Virginia managed to take out one bowl, but The Bay surged ahead on the scoreboard 13-8. Consecutive 2’s pushed the score to 17-8 with four ends to go, and the spectators began to sense the match could be in the bag. A tightly packed head on the 15th saw Harbord 1-up, until skip Jenny’s last bowl got a gentle nudge in off one of her own bowls to shift things a fraction, resulting in another 2 to Neutral Bay. On the 16th, the 2 went to Harbord, getting them into double figures but still needing 9 shots from 2 ends to force an extra end. The Leads battled it out, then Seconds Jenny and Genevieve went into action. Just when it looked as though Harbord might be setting up for a multiple, Jenny Hepburn drew in a beautiful bowl 6″ from the jack. In driving that bowl out, Genevieve also cleared out most of the head, but left the jack and her own shot bowl in place. Undaunted, Jenny H drew an even closer bowl for shot; however, when all bowls had been played, Virginia had achieved another 2 to Harbord, sending them into the last end 7 behind. With bowls evenly matched in the head, Harbord were holding 1 when Virginia’s 2nd bowl came in overweight and trailed the jack back to the few bowls behind the jack, to be holding 1 but with no prospect of a multiple. Nevertheless, Jenny P drew up and trailled the jack  away from the Harbord bowl to get the shot. With killing the end the only option remaining, Virginia drove but the head was unchanged, resulting in a 20-12 win for Neutral Bay.