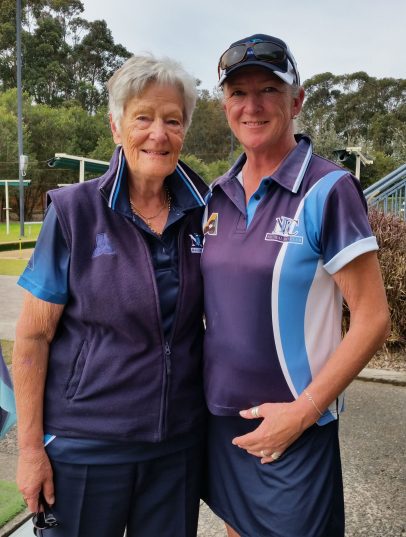 In a thrilling match on Tuesday 31 August, the Neutral Bay team of Jenny Palmer and Lynne Thompson took on Virginia Longfellow and Genevieve Delves of Harbord in the Open Pairs. From the outset, it was kept to an extremely tight contest, with Lynne killing the end on three occasions to deny the Harbord team an advantage. By the time the scores got to 11-11, there had never been more than a couple of shots difference between the teams. The Neutral Bay girls then fought hard to get the score to 14-12 in their favour with two ends to play. On the 17th end, with Jenny and Lynne holding two very close shots, Genevieve drove with her last two bowls but went cleanly through to the ditch both times for Neutral Bay to go into the last end 16-12. However, Virginia’s opening bowls were both in the count and, by the time Lynne took the mat for the last time, Virginia had added a third with two more bowls from Genevieve to come. Lynne’s bowl dropped several metres short and was answered by Genevieve drawing a 4th shot, and one bowl left to play for the chance to win the match. This time, Lynne made sure her bowl was up! It caught the side of the jack, sending it out towards the boundary, with one of Jenny’s bowls closest. After the Harbord team examined the situation, it was agreed there was nowhere to manoeuvre to make 4 shots to tie the match, so Genevieve had no choice but to go for the kill. She gave it her best shot, but the bowl didn’t make contact, leaving the Neutral Bay girls to pick up 2 shots to win 18-12 and book themselves a date at the State Play-Offs in October.

The Region 15 Play-Off for the Senior Pairs was also played on 31 August between Louise Cook & Margaret Brady (Belrose) and Jan Newell & Chris Gordon (Harbord). In the Seniors format of 3-bowl pairs 18 ends, the Harbord team dominated the contest from the beginning. The Belrose team played steadily and had some lovely shots, which were celebrated with much acclaim by the impressive crowd of Belrose supporters decked out in the Blue & Gold; however, their hopes of retaining precious shots were repeatedly dashed by good conversion shots from the Harbord team.