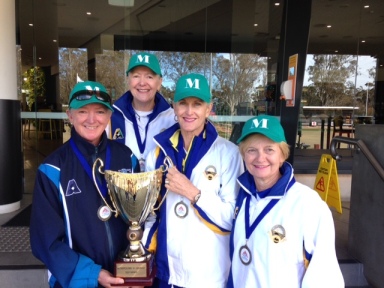 St John’s Park kindly sponsored the event and looked after the players in grand style. Twenty-four players are selected by WBNSW from both Sydney metropolitan clubs and NSW country clubs, and the competition takes the form of three rubbers, with the aggregate score of the six teams determining the winner of each rubber.

The pressure was on the Metro team as the Country has held the trophy for the past three years. A practice session to get the feel of the fast greens and bond with new team mates was held on the Friday in beautiful sunny 25-degree weather.  Unfortunately by the Saturday morning the winds were howling and the temperature had dropped significantly!  The Metro team got off to a flying start, with five of their six teams winning their games, and the first rubber was won by a convincing margin.  The pressure was now back on the Country girls.  Undaunted by the decreasing temperature and increasing wind speeds (and fueled by a lunch of lasagna and chips!) the Metro team buckled down to the job ahead. The matches were tighter than in the morning, however everyone concentrated on the big board and held firm to take out the second rubber and the trophy.  There was great excitement amongst the team, however celebrations were muted that night at the Rooty Hill RSL as a clean sweep was what the Metro team was after.  Sunday morning was freezing but, undeterred, the Metro girls played hard and held off a final challenge by the Country to win the third rubber by 3 shots – the clean sweep was achieved and the Metro team were jubilant. Lynne Thompson is a veteran of State representation and her skills shone over the weekend.  Jenny, Denise and Julie, who are new to this level of bowls, all performed well and were thrilled to play their part in such a convincing win.